Pin-up style history
1890-1920
The ancestor of pin-up art is considered to be the artist Charles Dana Gibson. American Illustrator in the 1880s-1890s led his own chronicle of the daily life of compatriots through Patriotic, romantic and especially satirical drawings. As part of his chronicle, he created a hand-drawn ideal of female beauty, called “Gibson’s Girl”. She was a young, beautiful woman with voluminous Breasts, a small waist, and wide hips. She had a high hairstyle, long flowing skirts and starched blouses, was distinguished by an independent disposition and a dominant character over men.

“Gibson’s girl” was popular among Americans for 30 years, its images can be seen on fans, clothing, Wallpaper, vases, dishes and other items.

At the same time, another American Illustrator, Howard Christie, created his ideal of female beauty, which later became known as “Christie’s Girl”. She was an educated, refined young woman with a strong character. Christie’s Girl first appeared in 1895 in the Century magazine.

“Christie’s girl” could be seen in book illustrations, calendars, and collectibles.

40 years
Pin-up images became most popular during the Second world war. Military planes, tanks, shell casings were painted with cover girls. Posters with their images were torn out of magazines, the contours of girls were cut out of calendars and attached to walls, car cabins and other surfaces. So, in 1941, the term “pin-up” (English to pin up — “pin on”) appeared. The girl whose image was placed on the poster was called “pin-up girl”.

In most cases, Actresses, models, and singers posed for pin-up illustrations. The most famous models of the 40s were Marilyn Monroe, Betty Grable, Rita Hayworth, Veronica lake, Ava Gardner, Carol Landis, Lana Turner, and others. Their stylized images could be seen on the covers of “Time”, “Cosmopolitan”, “Vogue”, “Esquire”, “Life” magazines; in ads for Coca-Cola sparkling water, Palmolive soap, “Lucky Strike” cigarettes, “Zippo” lighters, etc. In 1943, Earl MacPherson created an artist’s sketchbook with a pin-up girl on it, and in 1944, a deck of Win, lose, or draw playing cards, which also used the “cover girl” image. 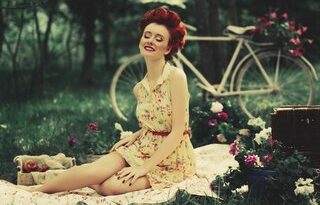 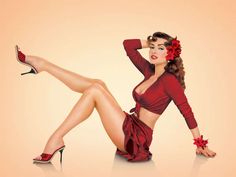 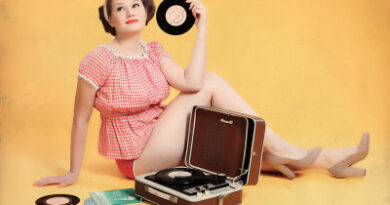